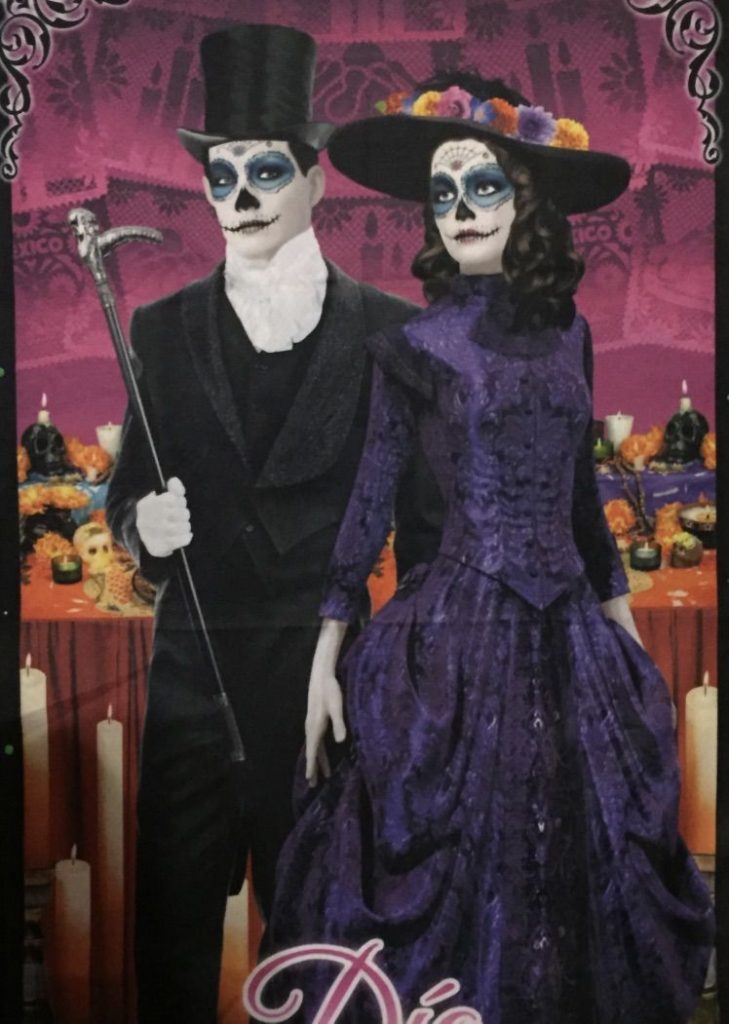 For insight into an unfamiliar culture, how better than to celebrate a popular festival, or in this case, fiesta, in the country where it originated? For this event, I joined hosts Sharon Gonzalez and Tom Travers, owners of Eat The Peach Travel, in San Miguel de Allende, Mexico. Our mission? To share an authentic experience of Dia de los Muertos (Day of the Dead) on their small-group tour.

Here’s an insider’s view of our fun adventure. 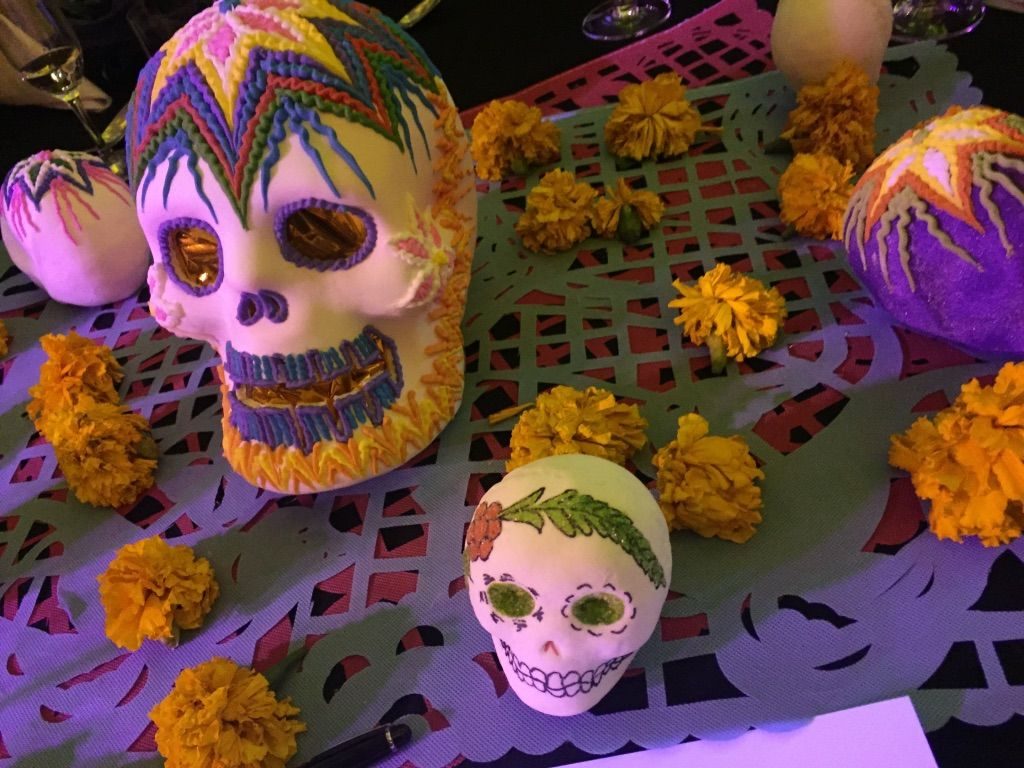 But first, you may ask, what IS Dia de los Muertos exactly? Commonly confused with Halloween, Dia de los Muertos does feature skeleton costumes. It’s also celebrated close to Oct. 31st, as both events originated in proximity to Fall harvest celebrations. Yet there are notable differences between the two.

Dia de los Muertos reflects a nod to its Spanish Catholic heritage. Combining both All Saints’ Day and All Souls’ Day, the festivities are a show of love and respect to the dearly departed. Here death takes a holiday, evoking a joyful, rather than fearful ambiance, unlike its Halloween counterpart.

The mood is indeed merry. Yet throwing a party to celebrate, rather than mourn, the dead might seem mind-boggling, if not downright macabre, to the uninitiated of this Mexican tradition. But in fact, showcasing skulls (calaveras) and skeletons (calacas) suggests a way to not only laugh in the face of death. Party-goers also welcome the dead back among the living, however briefly, in this annual event. 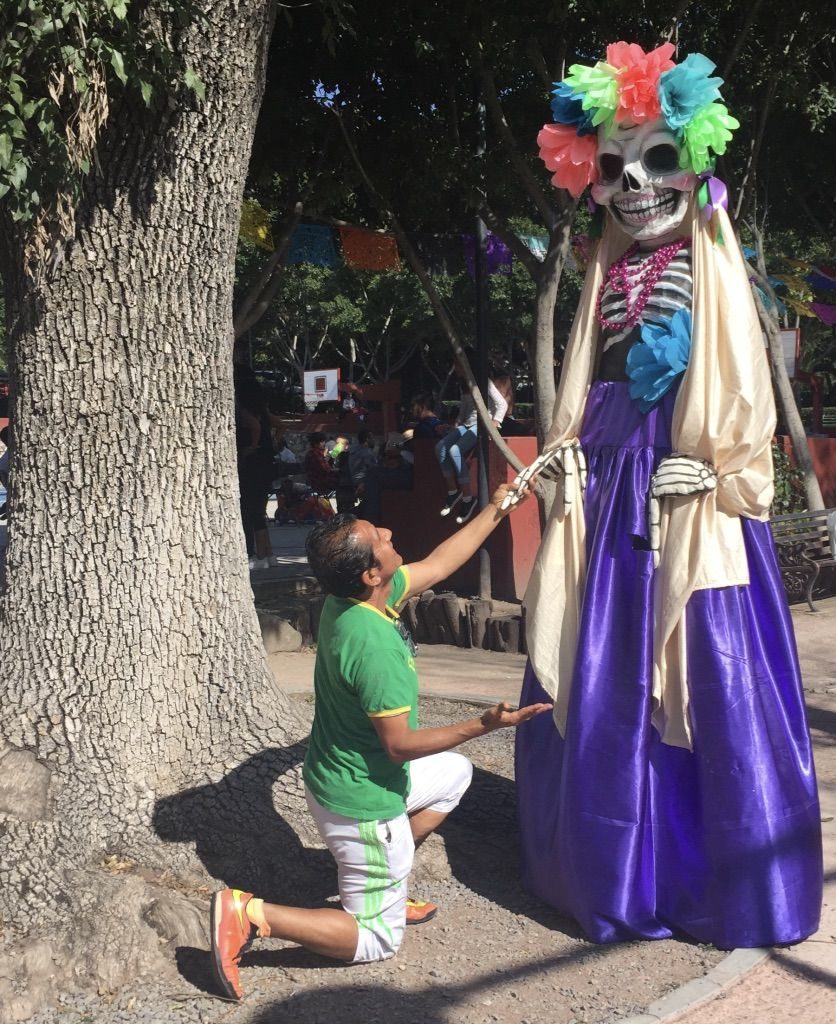 Iconic La Calaveras Catrina, a female fashionista skeleton, looms large (literally) over the festivities leading up to the two-day event on Nov. 1st and 2nd. Whether strolling through El Parque Juarez, the Artisan Market or the Jardin in San Miguel’s historic town square, you can see her likeness everywhere.

Artist José Guadalupe Posada first depicted La Calaveras Catrina shown only in an elegant, wide-brimmed hat in an 1813 etching. Posada had intended his caricature as a slight to native Mexicans whom he felt were adopting European customs at the expense of their own.

Later, another artist, Diego Rivera, developed the figure in his mural, Sueño de una tarde dominical en la Alameda Central (Dream of a Sunday Afternoon in the Alameda Central). In Rivera’s rendering, La Calaveras Catrina takes center stage among the leading figures of the day. The artist includes himself, then-wife Frida Kahlo, and Posada among the people in the painting. The mural reminds all of our close association with death regardless of our rank and status in this life. 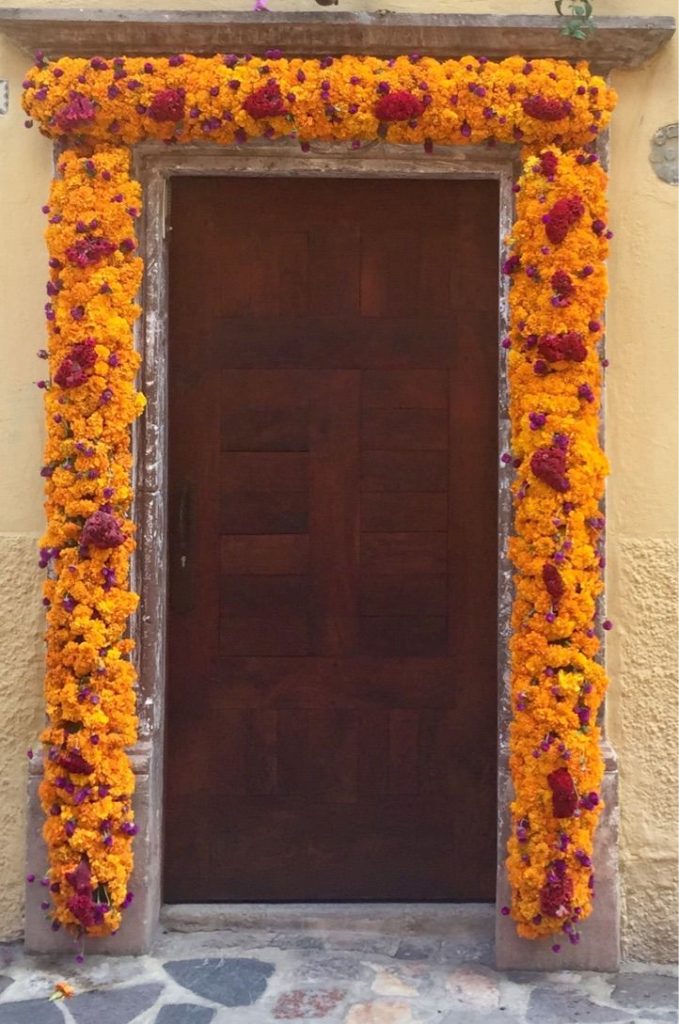 Beyond La Calaveras Catrina, costumes, skulls and skeletons, we discovered the significance of other symbols of Dia de los Muertos. Colorful Mexican marigolds (Cempasuchitl) adorn headstones and doorways. Why? Because celebrants believe the pungent scent of the flowers assists the departed in finding their way back to the living. 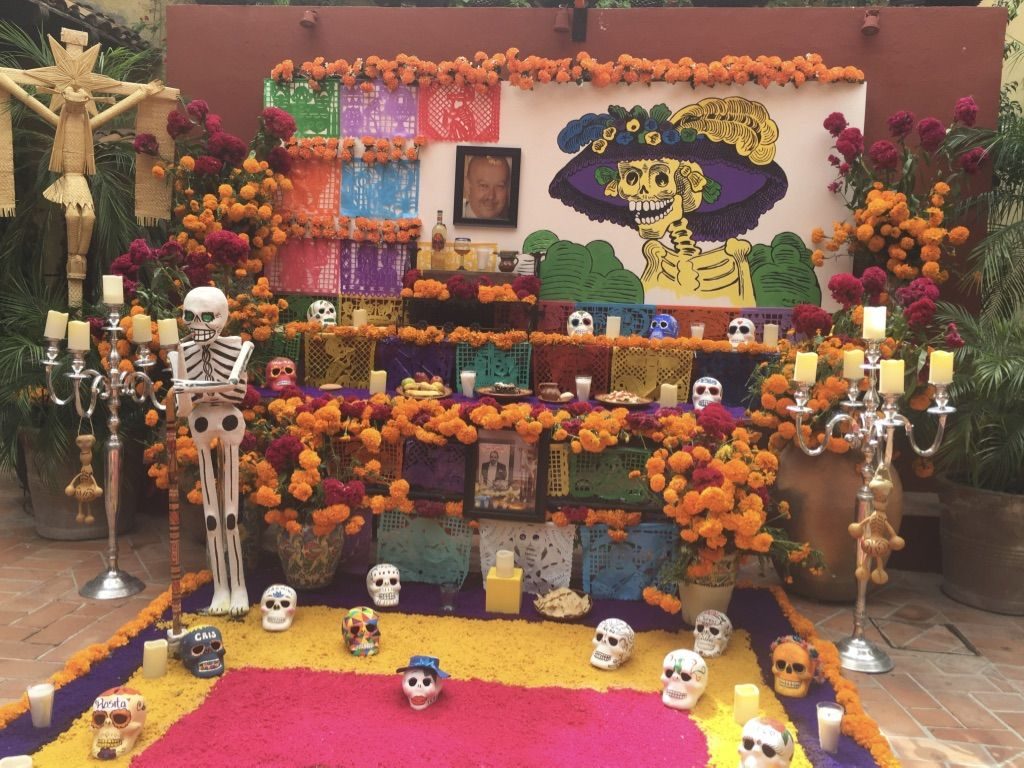 Ornamental ofrendas (altars) also honor the departed through a variety of elements representing water, wind, earth and fire. Each has its own symbolism: one or more candles to light their path home; decorated sugar skulls representing the bittersweet intersection of life and death; Copalli incense, like Mexican marigolds, to attract the spirits and ward off evil; pan de muerto (Day of the Dead sweet bread) flavored with anise and orange peel to please the spirits; and a photo of the deceased person together with a few personal possessions, like favorite foods or beverages. 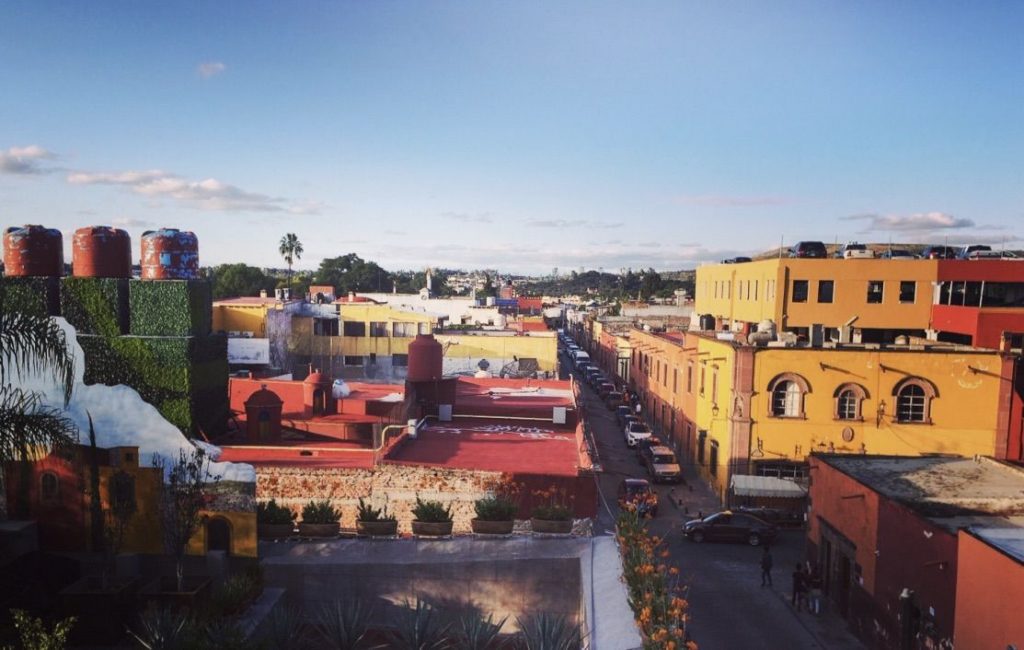 Start by wandering the cobblestone streets to get your bearings in this vibrant art community. One walk through the colorful, bougainvillea-filled vistas of San Miguel de Allende and you realize how much of your life you have lived in monochrome until now.

Mingle with the Locals. 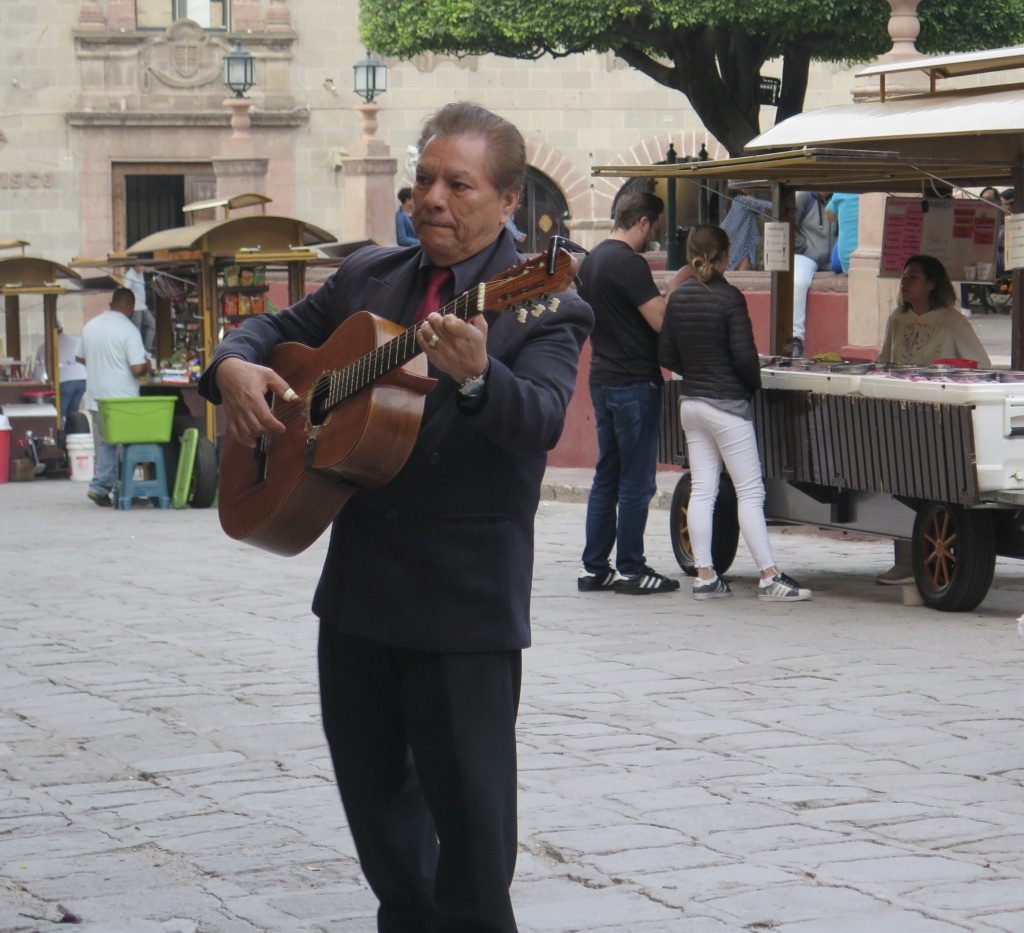 Mingle with locals in Parque Juarez or people watch at the Jardin in the heart of San Miguel’s historic center. Live Mariachi music, seemingly everywhere, will have you dancing to the Latino beat in no time.

At Our Lady of Guadalupe Cemetery, you can witness residents celebrating the lives of those they have lost with offerings brought for the occasion. Outside the cemetery, we viewed displays of elaborately-decorated ofrendas, poignant love altars for deceased friends and family members. 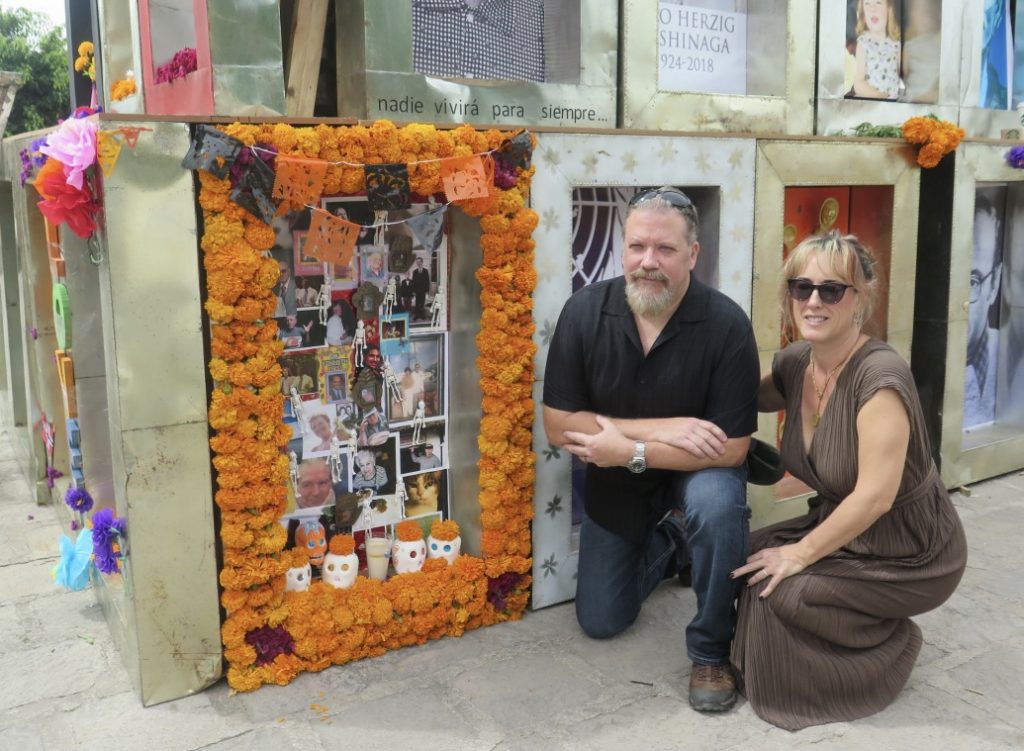 For our tour, Sharon and Tom invited us to bring photos of our own departed loved ones for a group niche which then became part of The Pyramid of the Dead. The brainchild of artist Tomas Burkey, the monumental structure is comprised of individual recessed structures honoring those who have died. 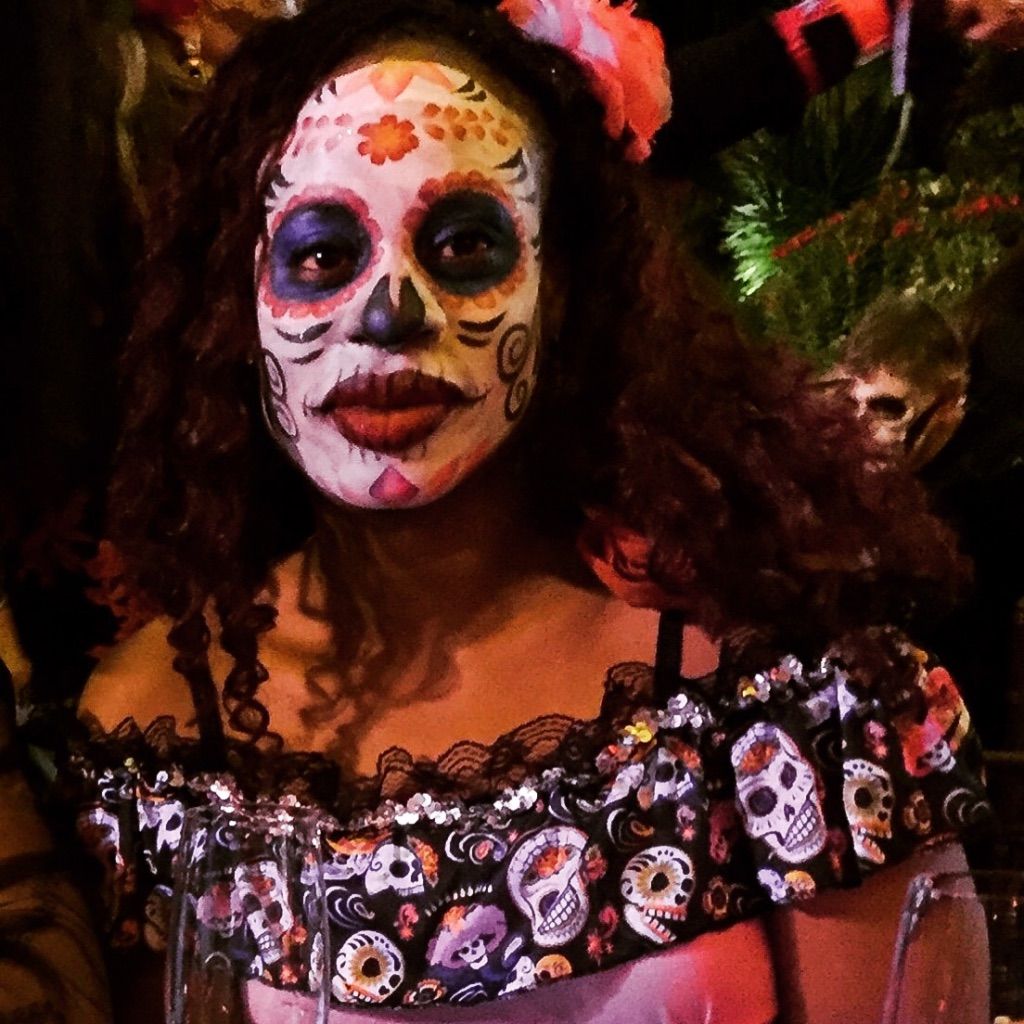 Our fun began as we made our way in full regalia to the luxury boutique Rosewood Hotel for a highly-recommended Pre-Parade Face-Painting Cocktail Party. Margaritas in hand, we sat while professional artists painted our faces in show-stopping skull designs in the tradition of indigenous Mexican culture. Plenty of photo opps., entertainment by local ballet dancers, Mariachi music and tasty nibbles soon followed.

When choosing your costume for the festivities, think Steampunk more than Halloween. Eat The Peach Travel provided suggestions for transforming ourselves into Catrinas (ladies) and Catrins (gents): large hats, long dresses, feather boas, netting and corsets for women; top hats, dark trousers, shirt and jacket or waistcoat for men. 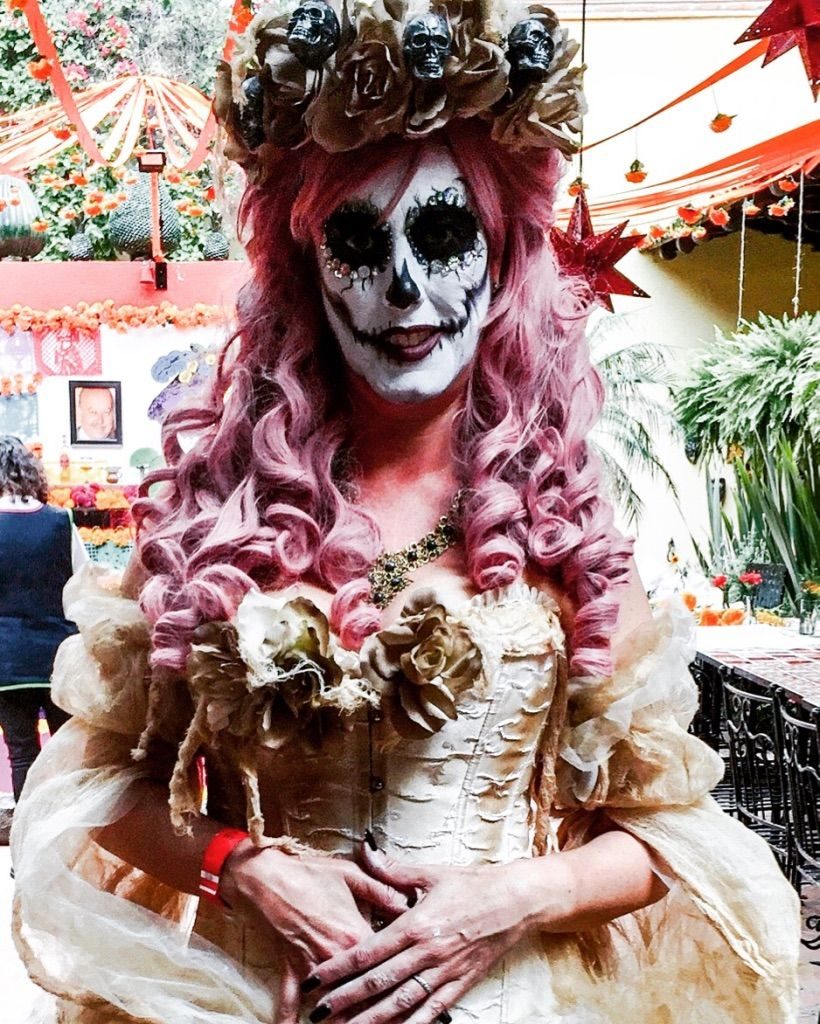 Our big day culminated with La Catrina Parade, a relatively recent phenomenon of Dia de los Muertos celebrations throughout Mexico. The parade began at the Rosewood Hotel and wound its way to the historic center of San Miguel de Allende. After returning to the hotel, our tour included a Dinner Contest Party. While most chose to sit back and enjoy the show while dining, our fearless leader, Sharon, took to the stage. She came just shy of capturing the prize for “Best Costume Catrina.” My money’s on you for the big win next year, Sharon! 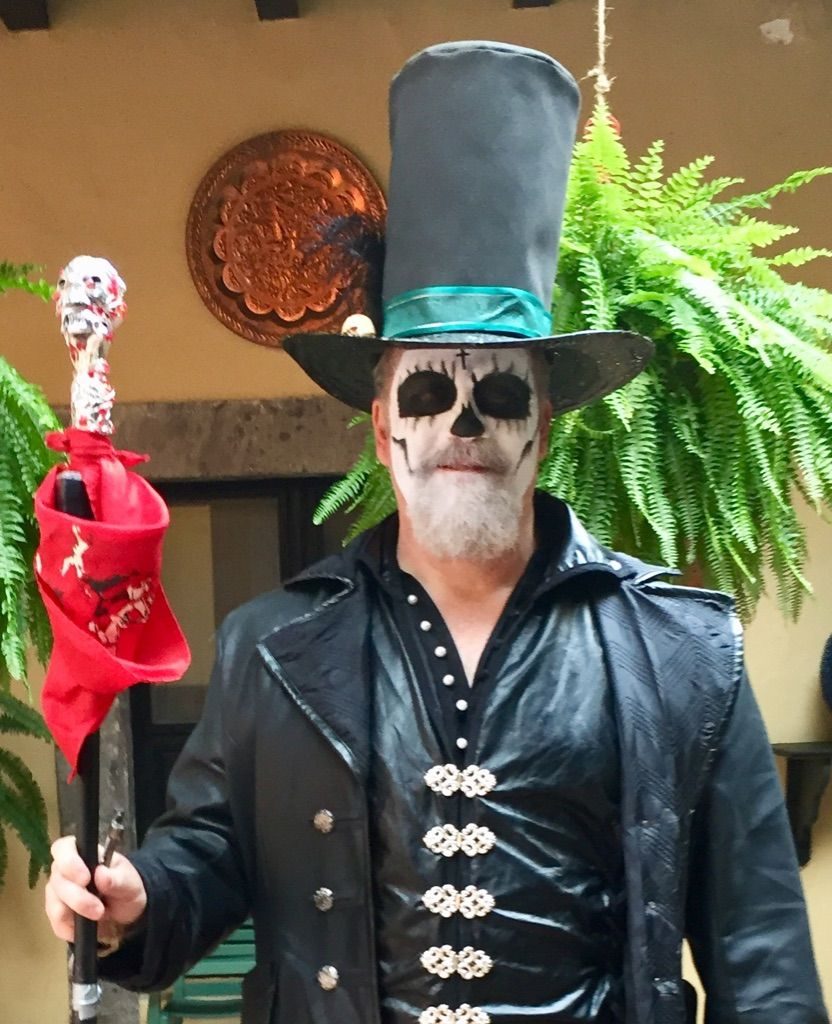 Be sure to wear flat, comfortable shoes in general throughout your stay in San Miguel de Allende, but especially when on the parade route. You will be walking over cobblestones in the dark, maybe after having had a drink or two, so be sure to choose shoes that will be kind to your feet.

Give Back to the Local Community. 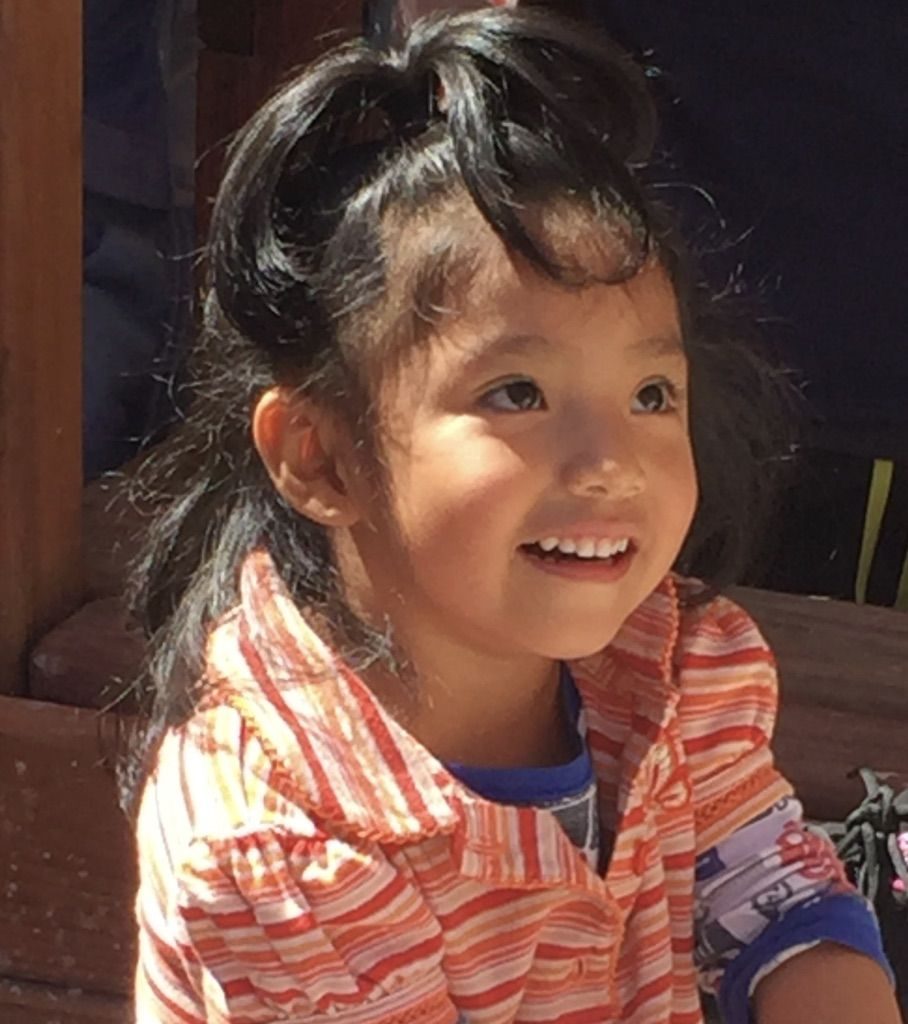 Each year Eat The Peach Travel donates $500.00 to sponsor a year of care for a child at Centro infantil De Los Angeles (casadelosangeles.org). This means that a portion of your tour fee goes directly into supporting local residents.

Thanks to Sharon Gonzalez and Tom Travers for hosting!

Wanderboomers, how do you celebrate Dia de los Muertos?