For this 10th annual celebration of artisanal ciders from around the world, ticket holders wandered the grounds of South Lake Union, the venue’s new home across from MOHAI, while enjoying tastings from among the 180 + ciders on display. 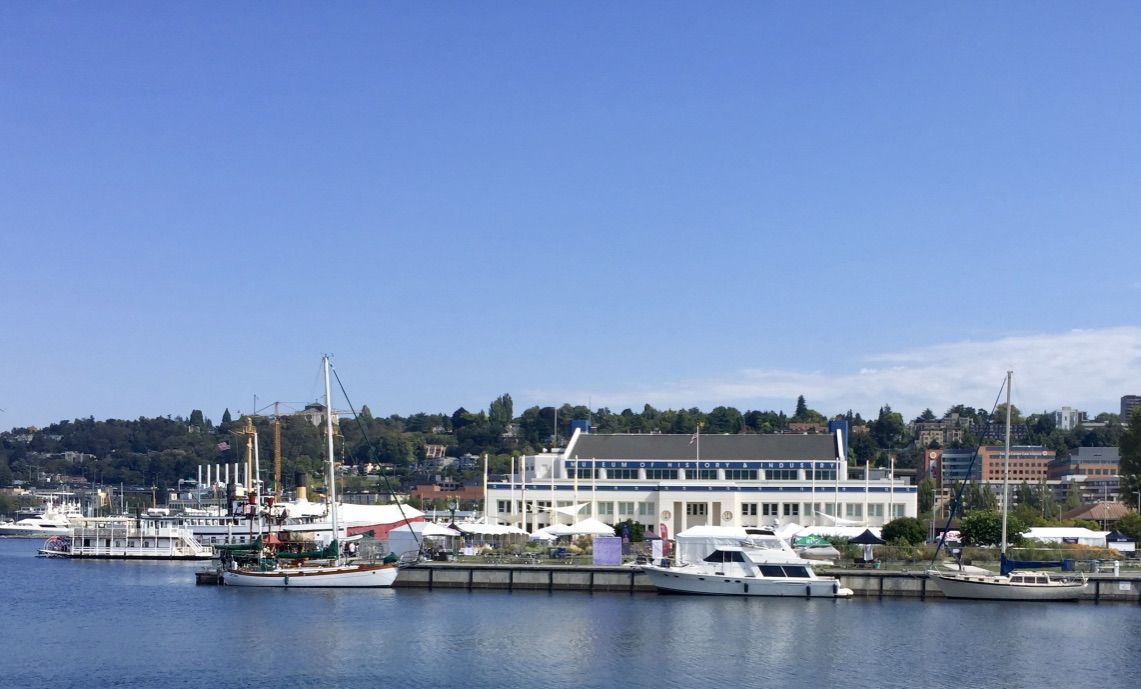 Each Fall legions of hard cider fans look forward to Cider Summit Seattle for several reasons: connecting with local producers, sampling seasonal flavors, and learning the history behind local and international favorites. Plus, the musical artist performances on hand make for a fun, festive event.

If you’re still new to the Northwest cider craze, Cider Summit Seattle and WA Cider Week present an easy way to discover your own personal cider style. Do you lean towards modern or heritage ciders? French or more towards English? Fruit or hopped? Spiced, sour or barrel-aged flavors? You won’t know unless you give ciders a try.

Family-owned Avid Cider Co. is on a mission to produce sustainably-sourced hard cider using local ingredients that balance sweet, dry and tart flavor profiles.  Based in Bend, Oregon, the company recently opened a taproom in Portland to showcase its ciders that are “100% fermented from NW fruit.”

Besides its signature Organic Dry Cider, Avid creates fruit-forward flavors that include Blackberry (a blend of blackberries and black currants), Apricot, Vanilla Bean Pear, and Watermelon Rhubarb, among others. Avid’s Dragonfruit Cider, is a standout with a combination of NW apples, raspberries, and dragonfruit.  Be forewarned when tasting, though, as its description states: “Side effects might include breathing fire and other unknowns.” That should get your date’s attention. 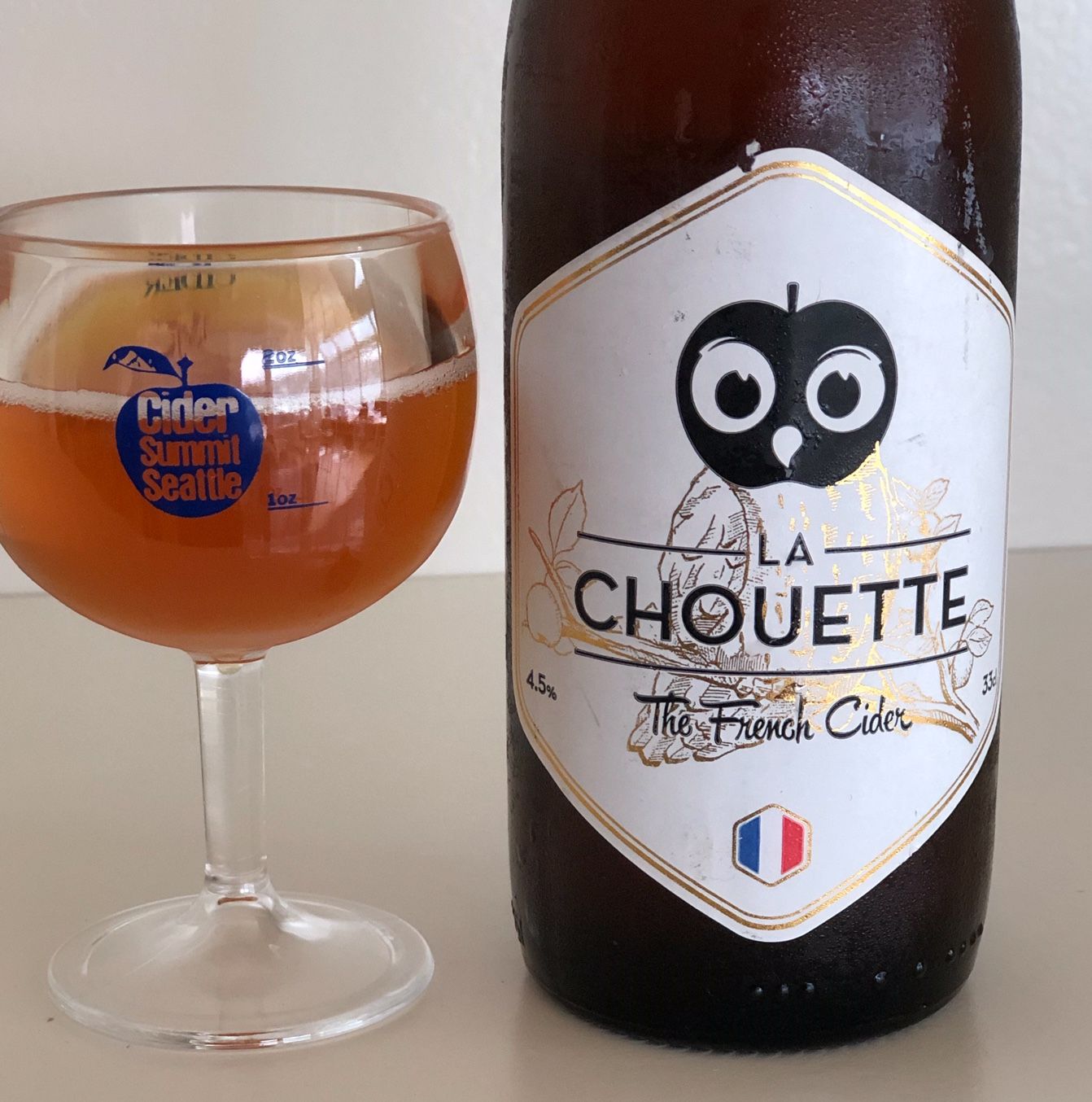 What distinguishes French ciders from other artisanal ciders around the world? Just ask Joan Harkins, Chief Cider/Calvados Enthusiast of French Cider, Inc. Through her company, Beauchamp Imports, Inc. Joan imports apple- and pear-based ciders from the Normandy, Brittany, and Basque regions of France.

With its relatively low alcohol content, typically 3 – 7%, French cider serves as an ideal complement to a variety of food pairings and dining occasions, day or night, says Harkins.

For Cider Summit Seattle, attendees sampled a Basque cider, La Chouette, from the small region covering southern France and Northern Spain. The light-colored demi-sec offers a balanced blend of sweet and sour flavors unlike many Basque ciders that tend towards a more tart flavor. 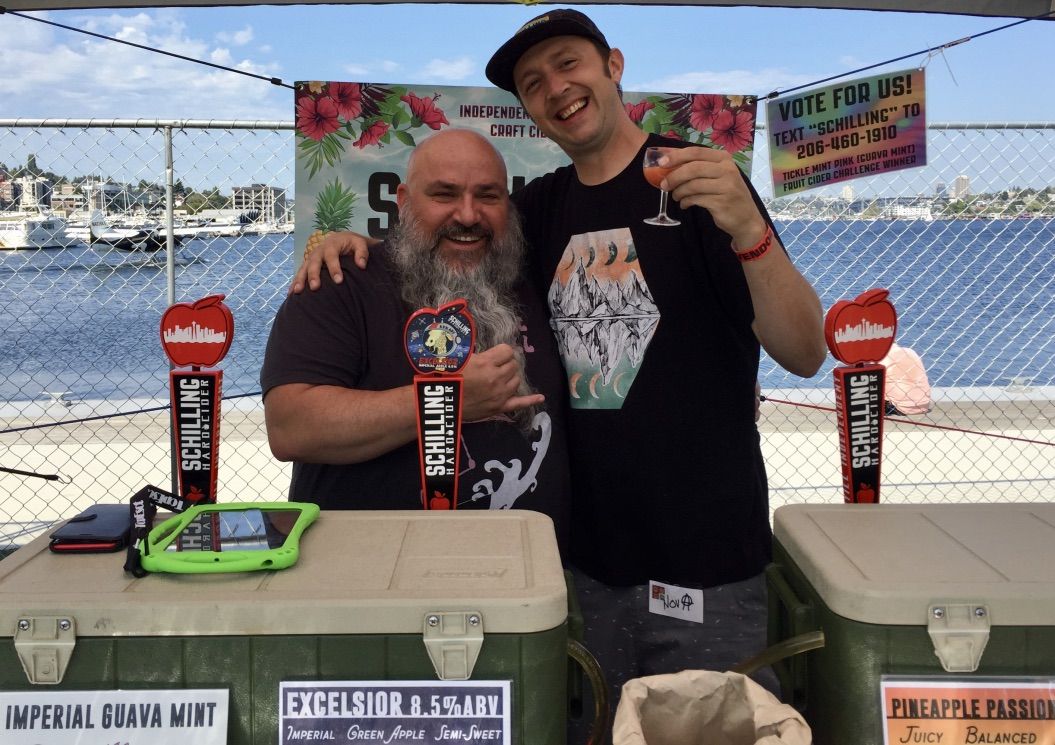 Defining its ciders as “innovative” and “bold,” Schilling Hard Cider makes its home in Seattle’s Fremont neighborhood and Goat Blocks in Portland. The company proudly provides handcrafted ciders that are 100% fresh-pressed apples and locally-sourced ingredients. Schilling also offers “the highest ABV cider available in a 6-pack in the nation” with its Excelsior at 8.5% ABV.

To meet the 2019 Oregon Fruit Cider Challenge at Cider Summit Seattle, the cider house presented Imperial Guava Mint, a velvety coral-colored concoction that tasted like a smoothie. Also on hand? Schilling’s most popular cider, Grapefruit Chill, a tart and refreshing thirst-quencher for a warm, sunny day.

Interested in learning how to create your own craft cider? Schilling is offering a cider-making class at each of its two locations, coming right up on 9/14 in Portland and on 9/28 in Seattle. 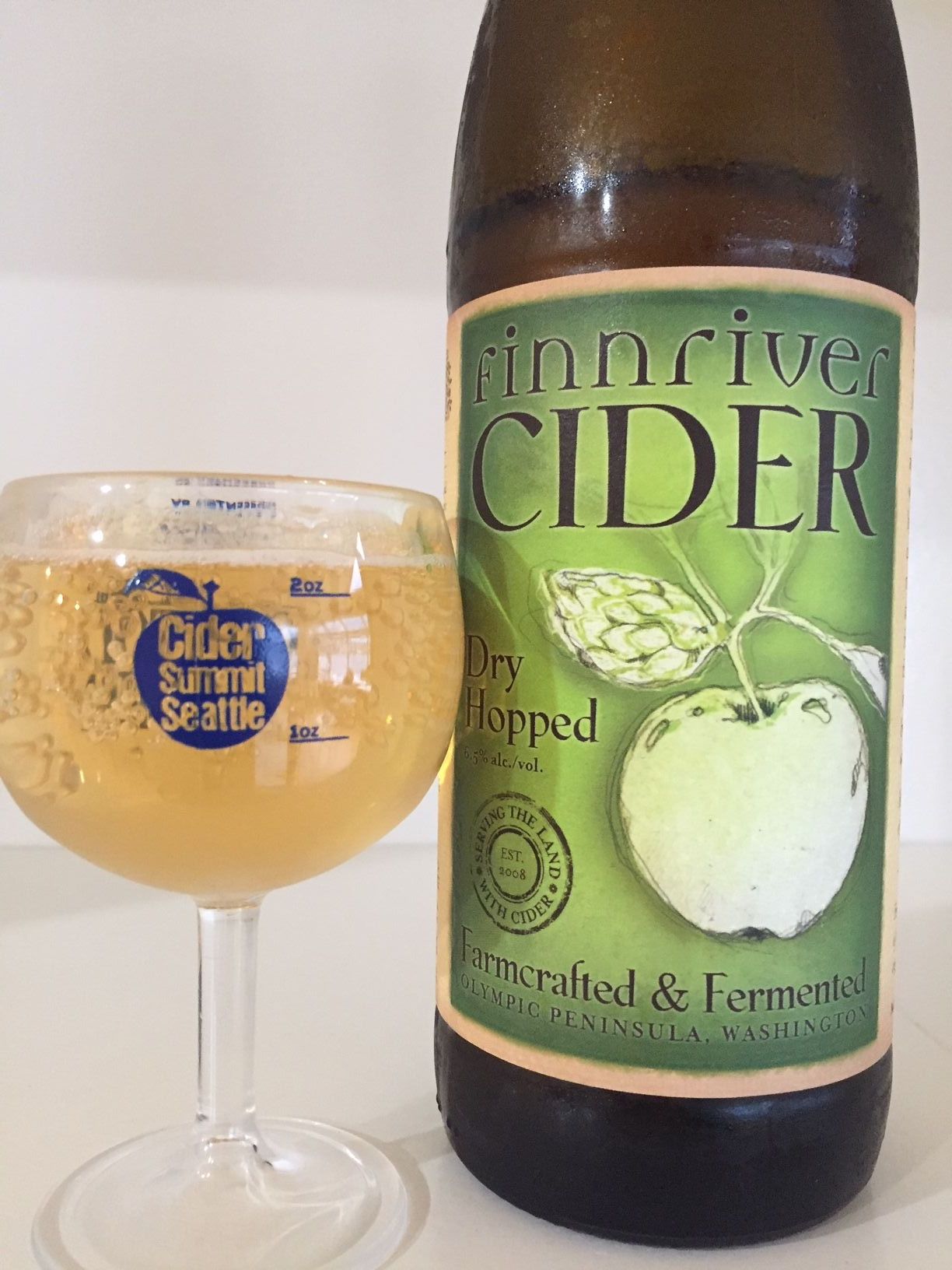 Finn River’s success tells a story of collaboration among farmers, fermenters, and good neighbors. Great timing and ripe apples, of course, also have something to do with the company’s growth since its start in 2008. Under the partnership of Eric Jorgensen and Keith and Crystie Kisler, Finn River offers orchard tours & tastings, and counter, seated, and deaf-friendly tastings in the summer months at their farm on the Olympic Penninsula.

At Finn River, inspiration comes from cider heritage traditions, the lure of the land, and the abundant possibilities of the fermented apple. 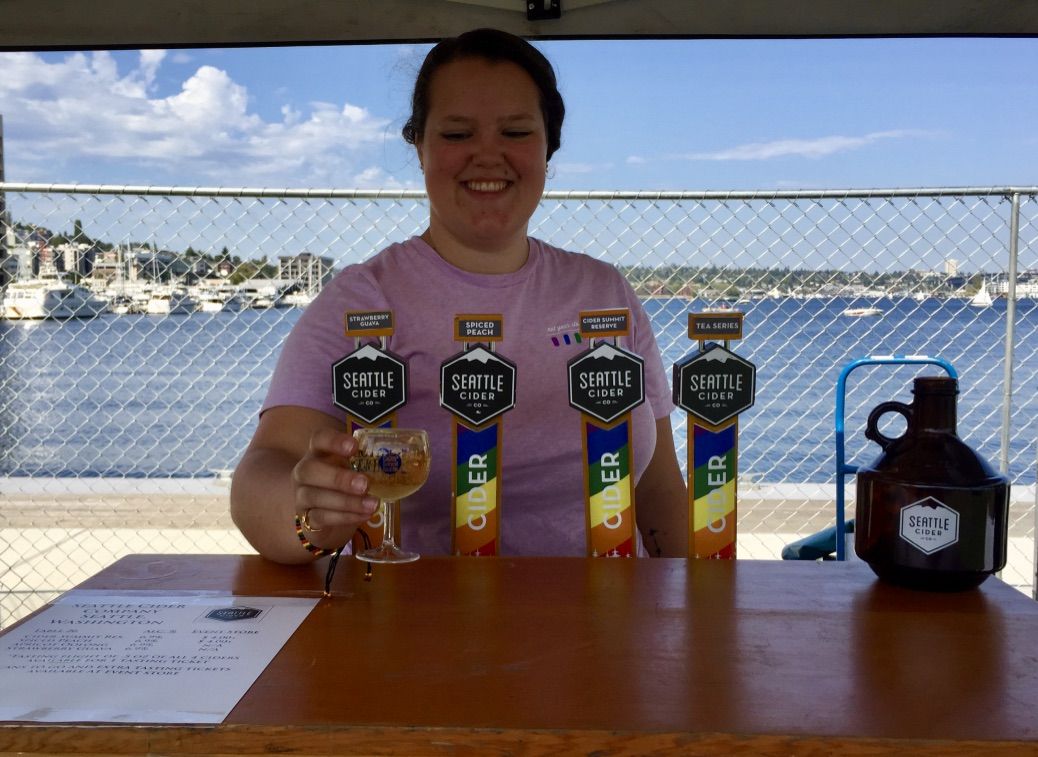 The company’s goal of reducing the emphasis on excessively sweet ciders focuses on the natural flavor of Washington State apples instead. From its first offerings of Dry and Semi-sweet hard ciders, the company’s year-round inventory now boasts Tangerine Tumeric and Basil Mint flavors as well.

Fall highlights seasonal ciders like Pumpkin Spice and Oaked Maple while the limited Three Pepper Hard Cider is only available at The Woods Tasting Room. Located in Seattle’s industrial SoDo District, the company shares the site with Two Beers Brewing.

For a graphic on their 5-step Cider Making Process, visit Seattle Cider Company. 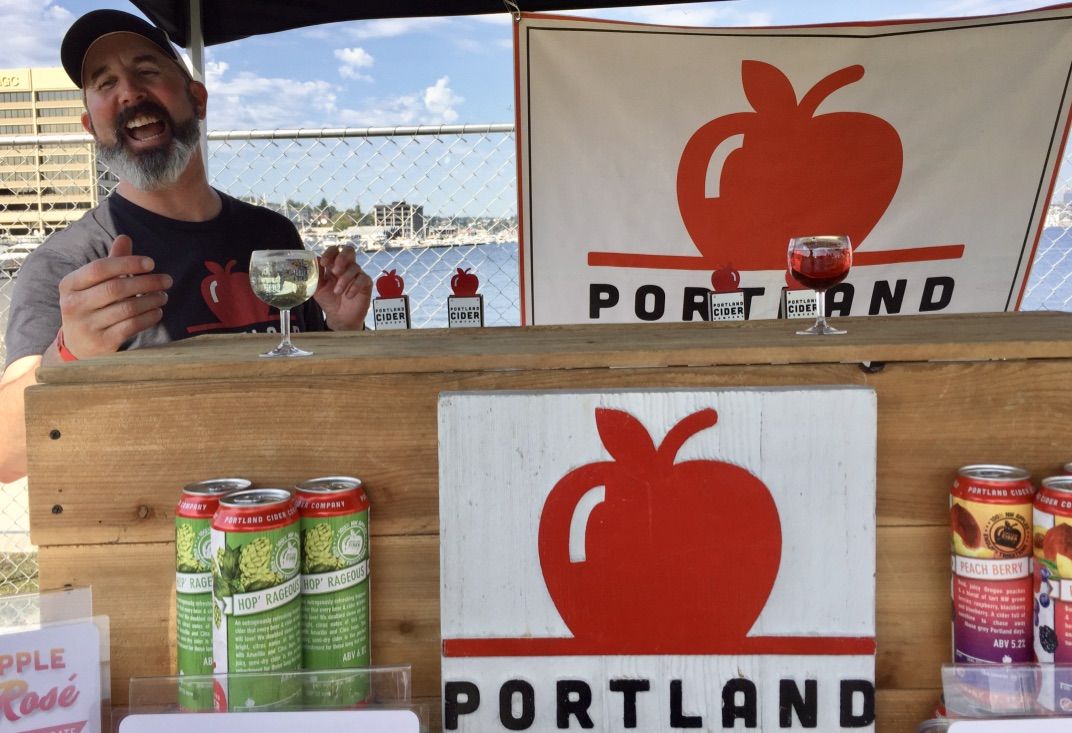 After sampling the Hop’Rageous, we agreed that the cider “pulls the notes off the hops but doesn’t smack you in the head with hop flavor.” Brand new and seasonal, the company entered Pach Berry as their contender in the 2019 Oregon Fruit Cider Challenge.

Founders Jeff and Lynda Parrish started Portland Cider Company in 2012, blending English and Northwest cider traditions and techniques. Since then, their award-winning ciders have popped up in venues throughout the Northwest. Perennial favorites include their flagship ciders, Kinda Dry and Sorta Sweet. 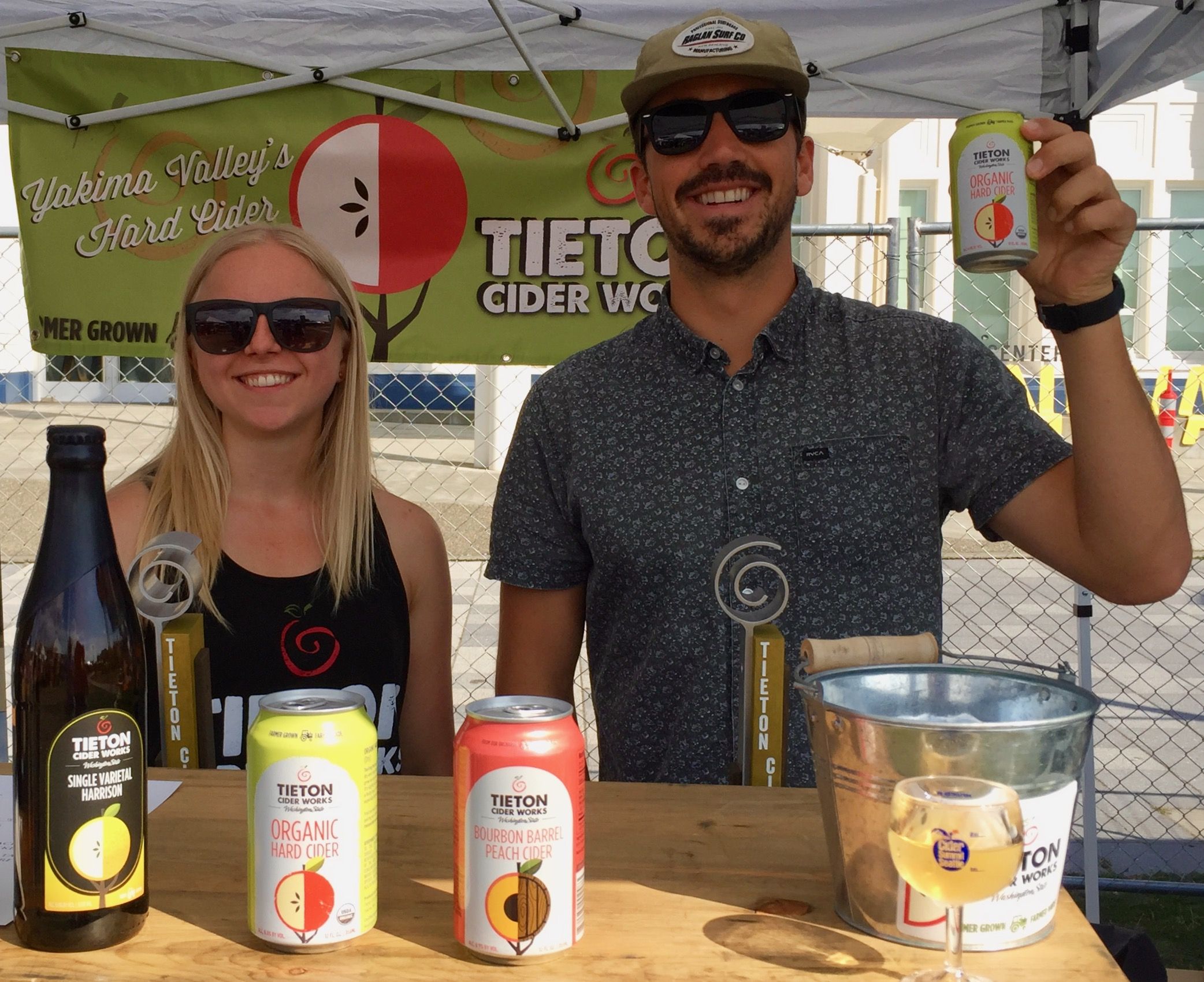 One notable release comes with a rich backstory. Once on the brink of extinction, the Harrison apple today enjoys a resurgence in Tieton’s Single Varietal Harrison Cider. Sales and marketing reps., Brian Coyle and Jenna Hyppa, shared the fascinating facts behind the Harrison’s illustrious East Coast heritage. Popular before and after the American Revolutionary War, the apple was thought to be lost before a fruit historian discovered two remaining trees in New Jersey in 1976. Since then, the Harrison apple has once again become a popular cider apple.

Tieton’s choice, a golden-colored cider in a blend of spiced apple and honey with a hint of ginger offered a fitting finish to this sunny day at the 10th Annual Cider Summit Seattle.