If you’ve been putting off a visit to see Seattle Art Museum (SAM)’s current exhibit, Andrew Wyeth: In Retrospect, the good news is you still have time. The bad news? The exhibit closes next Monday Jan. 15th so waste not a minute getting your tickets.

Andrew Wyeth looms large in the pantheon of mid-century American artists, though I was surprised to learn he is less well known on the West Coast according to Pat Junker, SAM’s American Art Curator. Perhaps the fact that Wyeth’s drawings and paintings center around the land and people in his hometown of Chadds Ford, Pennsylvania and coastal Maine where his family summered, contributes to his reputation as a regional American artist. 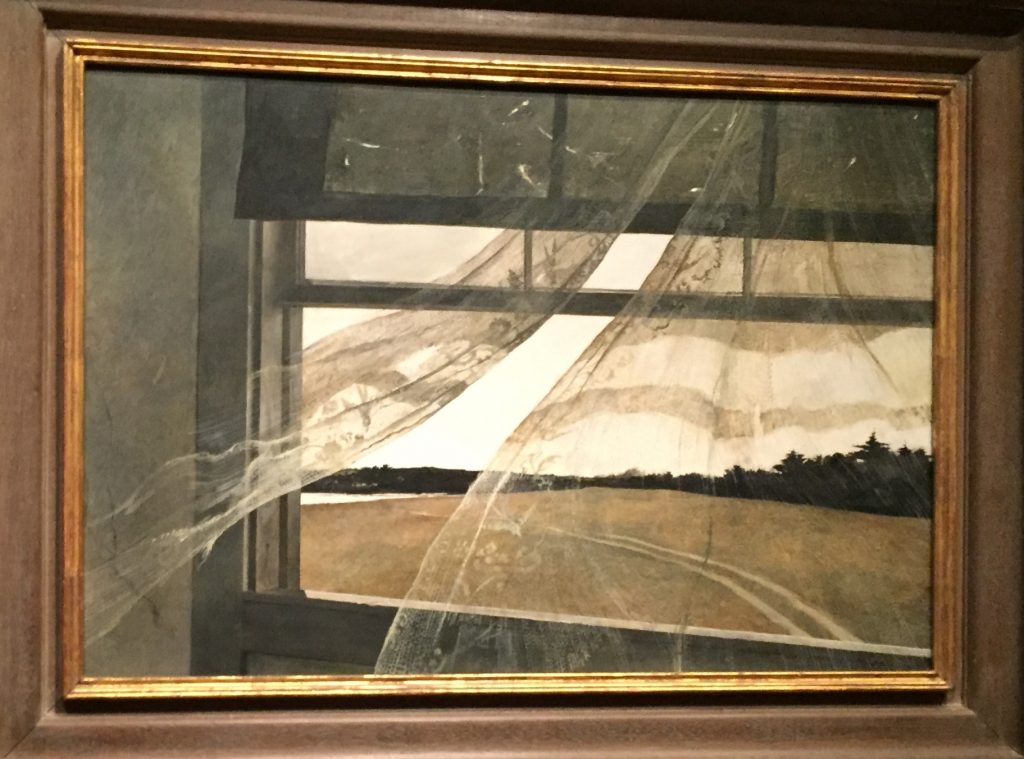 Son of legendary artist, N.C. Wyeth, Andrew followed in his father’s footsteps from a young age, painting at first in watercolors. Later he began using egg tempura as a medium though discouraged from doing so by his father. 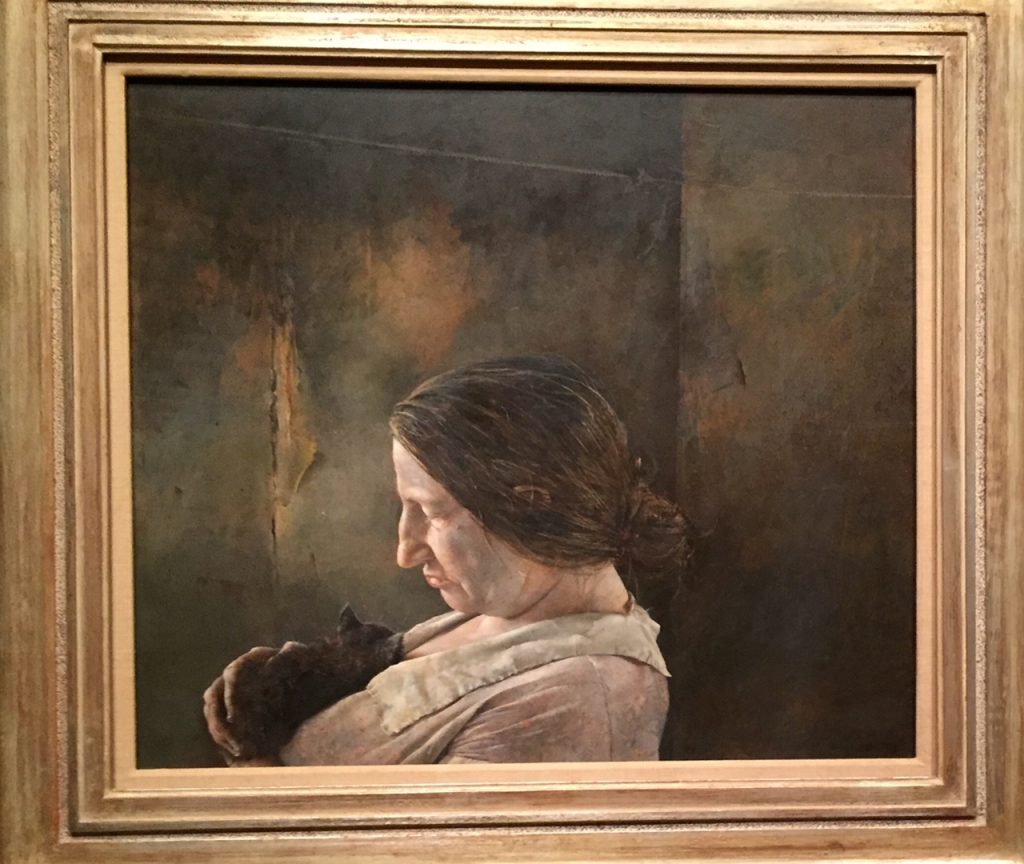 But whereas N.C. Wyeth had achieved renown as a vivid illustrator of seascapes and swashbuckling scenes from classic literature, Andrew’s works portrayed stark landscapes and a stoic cast of characters. Neighbors like Christina Olson (Maine) and Karl Kuerner, drifter Willard Snowden and nurse Helga Testorf of The Helga Paintings (Chadds Ford) feature prominently in his paintings. 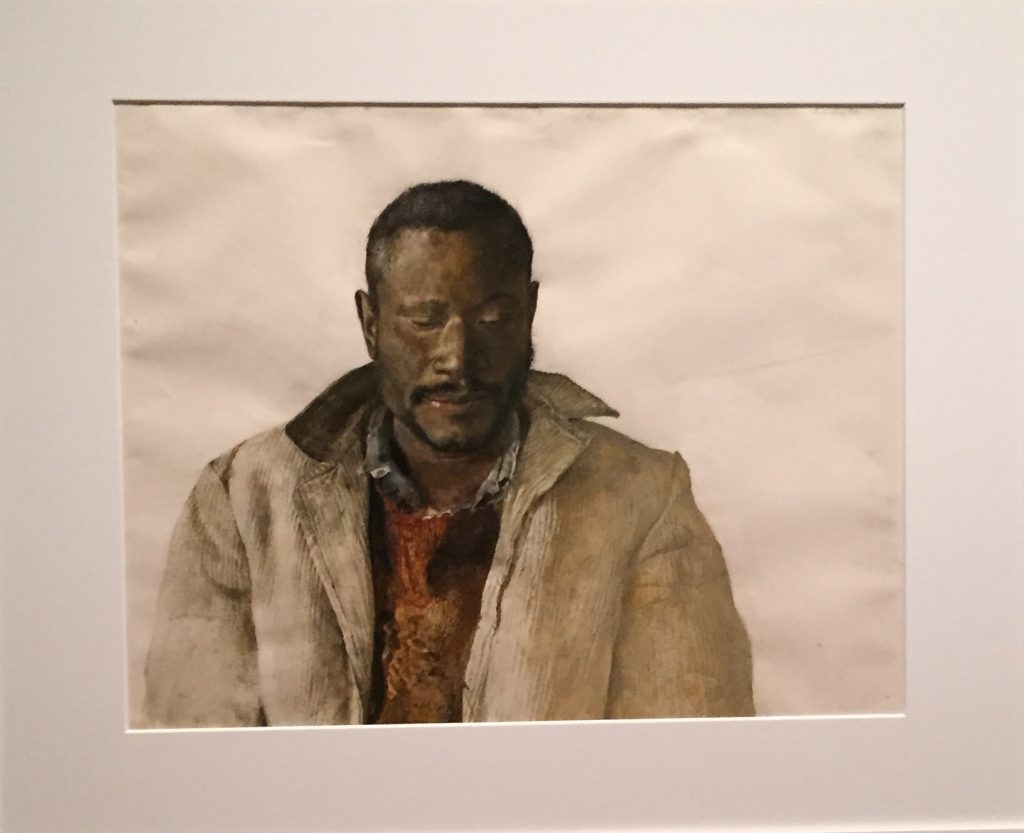 One of the most poignant photos from the exhibit features a young boy, his hand outstretched as he runs down Kuerner’s hill outside Chadds Ford. Not shown at the bottom of the hill is the railroad crossing where N.C. Wyeth and his two-year-old grandson were killed when their car was hit by a oncoming locomotive. Theoretically, the young boy in the painting is Allan Lynch, Andrew Wyeth’s childhood friend, who discovered the bodies after the tragic accident and protected them until authorities arrived on the scene. But Andrew Wyeth later claimed: “The boy was me at a loss, really” grieving the loss of his father and nephew. 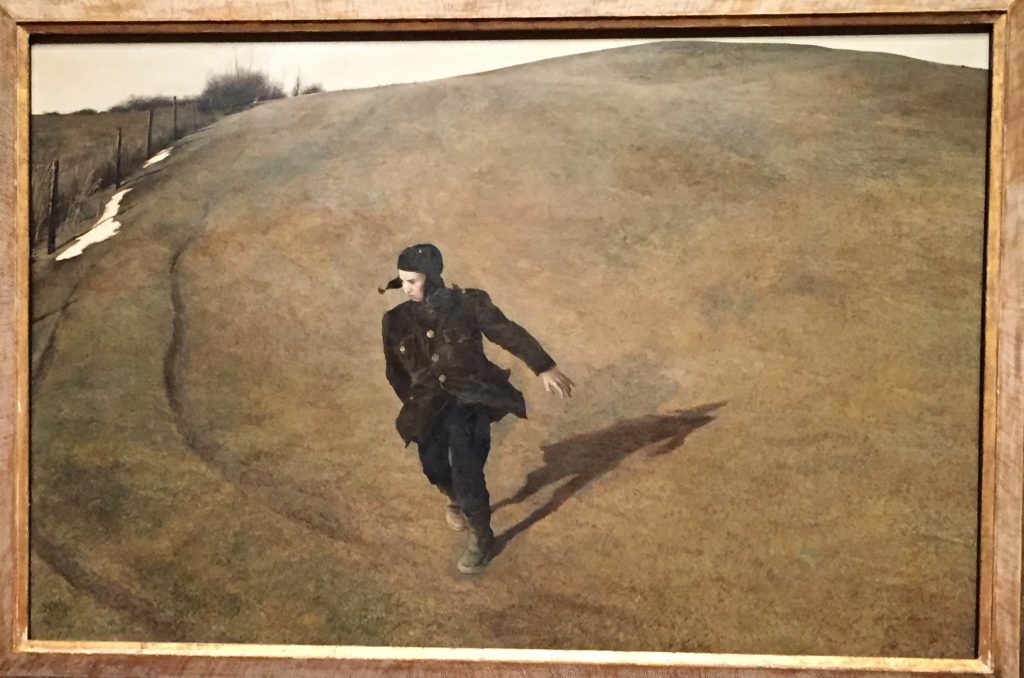 In partnership with the Brandywine River Museum of Arts, SAM’s exhibition celebrates the 100th anniversary of Andrew Wyeth’s birth. The exhibit offers a comprehensive overview of the artist’s 75-year career through the lens of 110 drawings and paintings spanning from the late 1930s to 2008, including rarely seen works from the Wyeth family. 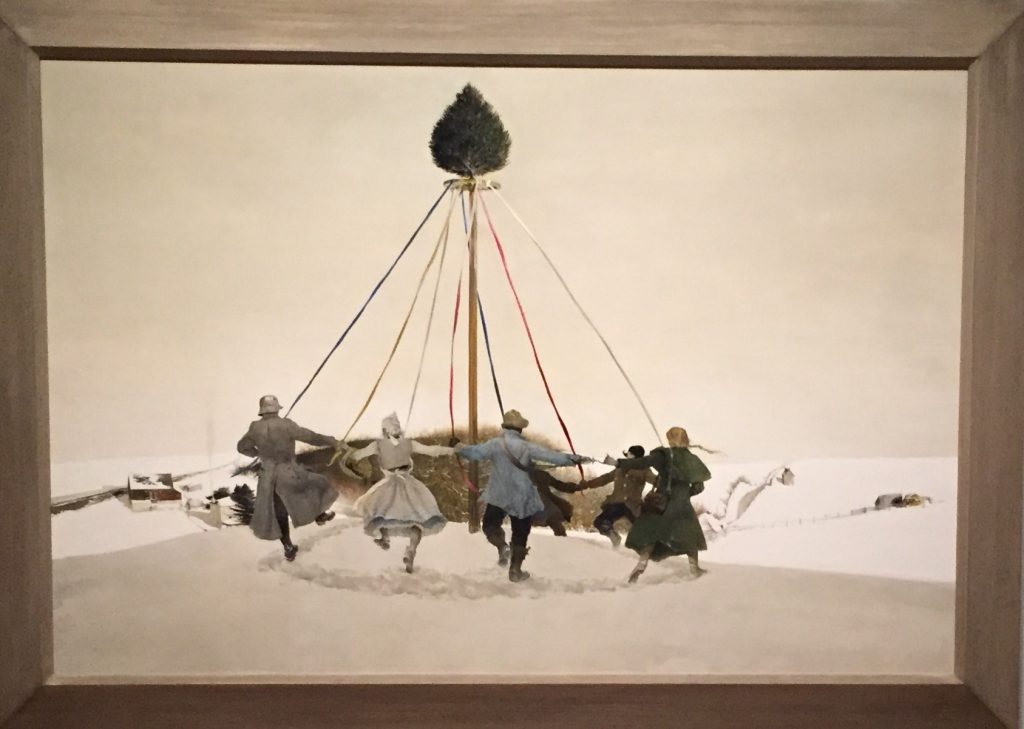 Not only do visitors have the chance to observe Wyeth’s paintings in chronological order for a sense of how his work evolved over the decades; visitors can also get a glimpse into Wyeth’s creative process from the drawings and variety of media on display. From film clips of King Vidor’s The Big Parade and Ingmar Bergman’s The Seventh Seal, viewers can also explore how Wyeth’s artistry was influenced by film and war images.

For more information on securing tickets and extended museum hours for the exhibit this weekend, visit Seattle Art Museum.

While SAM’s Andrew Wyeth: In Retrospect exhibit closes on Jan. 15th, you can learn more about Wyeth’s film obsessions in the Films of Ingmar Bergman series, hosted by SAM January 11 – February 22, from 7:30 – 9:30PM.

Or pick up a copy of the 240-page exhibition catalog, edited by SAM curator Patricia Junker and Brandywine curator Audrey Lewis. The catalog features Junker’s analysis of four significant periods in Wyeth’s career, together with essays by scholars in the U.S. and Jaoan. The catalog retails for $55.00 and is available for purchase in SAM Shop.

Gauguin Pays a Visit to Seattle