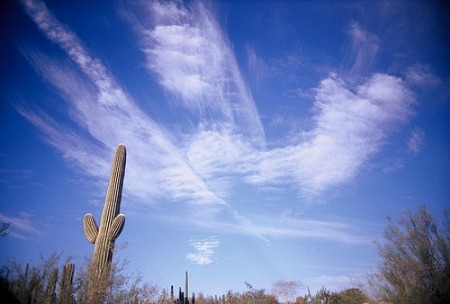 While the East Coast readied for bombogenesis (the ultimate snow bomb) this week, we Seattleites have enjoyed unusually balmy weather with clear, sunny skies and temperatures in the 60s. Rain is moving in again, but overall, not a bad backdrop for our weeklong celebration honoring the Seattle Seahawks, top contenders for the NFL Super Bowl XLIX championship next Sunday.

If you’re one of the lucky 12th Man members who plan to visit Phoenix for the big game, you’ll find plenty of fun celebrations to attend throughout that city, too, this week, even if you can’t make it inside the University of Phoenix Stadium for the Super Bowl game itself. Here’s how to make the most of your stay: 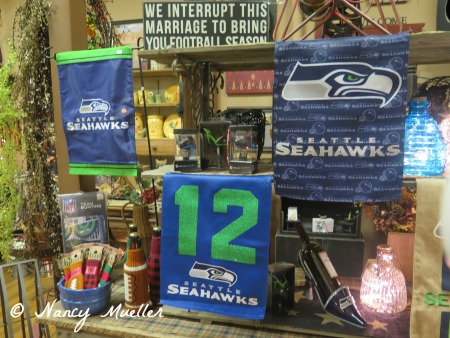 For what looks like the biggest bang for your buck, a $35.00 entry fee for adults ($20. age 12 and under), gets you into an interactive theme park with games, exhibits, a photo op with the Vince Lombardi trophy, autographs with NFL players like Seahawks cornerback Richard Sherman (today between 5 and 7PM!), and youth football clinics.

Not to worry if your plans don’t include a visit to Arizona’s star attraction, the Grand Canyon, on this trip. Within the 12-block perimeter of Verizon Super Bowl Central, organizers have created a rock wall set designed with rock texture to resemble the mesmerizing monument’s natural terrain. The site includes a dramatic 20-foot waterfall and 18-foot video screen at the peak. Up to 20 novice and experienced climbers can scale the wall at a time.

So where do Seattle’s 12th Man fans congregate to watch the Super Bowl XLIX game if you’re not a lucky ticket holder? Word on the street is that the Skeptical Chymist attracts the largest Seahawks’ fan base in Arizona. Celebrations begin on Thursday at 7PM, followed by a viewing of the NBC Seattle King 5 morning show from 6 – 10 AM on “Blue Friday” and a 12th Man Rally on Saturday at 7PM. Doors open at 11AM on Super Bowl Sunday. $15.00 gets you in the door, but plan your place in line because the Skeptical Chymist doesn’t take reservations.

Thanks to host Visit Phoenix for the chance to discover how the city is rolling out the red carpet to Super Bowl fans this week! If you’d like to explore all that Phoenix has to offer beyond the Super Bowl festivities, check out Visit Phoenix.

Where will you be watching NFL Super Bowl XLIX  and cheering on the Seattle Seahawks on Sunday, wanderboomers? 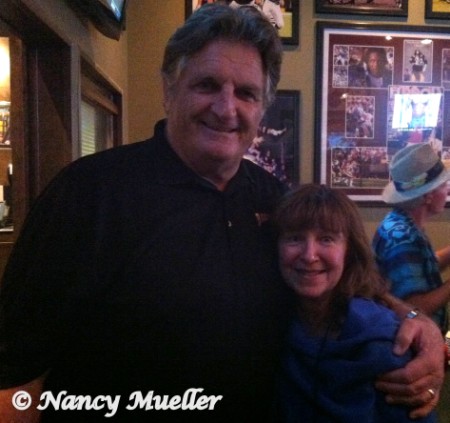 Wherever you plan to watch the Seattle Seahawks soar to victory over the Denver Broncos in the NFL Super Bowl XLVIII, you’re probably already thinking about the day’s menu. Whether having a tailgating party or celebrating with a potluck party from the comfort of your living room, finger food, hearty appetizers and an easy super bowl dish always make my list of favorites.

For an inspired Super Bowl menu, who better to ask than a legendary former NFL football player, now reinvented restaurant entrepreneur? After playing college football for the University of Alabama, Bob Baumhower went on to play nose tackle (middle guard) for the Miami Dolphins in the late ’70s through mid-’80s. 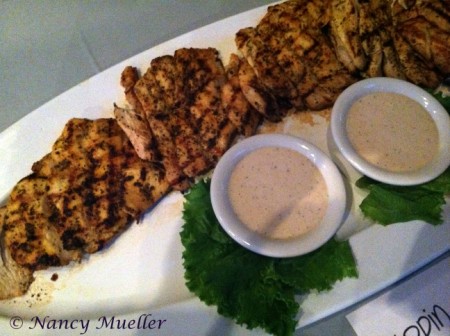 Despite the fierce rivalry between the Miami Dolphins and New York Jets at the time, Baumhower joined forces with the New York Jets quarterbacks, Joe Namath and Richard Todd, to open Bachelors III Restaurant in Ft. Lauderdale which became a favorite celebrity hangout.

Since then, Baumhower has developed his own restaurant empire that includes the Compleat Angler Seafood Bar & Grille in Orange Beach, Alabama. Named in tribute to the classic tale about fly fishing by Izaak Walston, the location combines fresh seafood with Southern Hospitality, a term capitalized in Baumhower’s style of hosting. 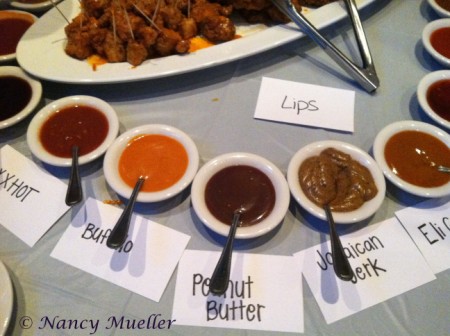 Thanks to sponsor Gulf Shores & Orange Beach Tourism, I  had the honor of meeting Baumhower at his restaurant where I  sampled several dipping sauces for Buffalo chicken wings, a meal as legendary as the man himself. To spice up your own Super Bowl festivities, how about trying your hand at Alabama BBQ Shrimp & Smoked Gouda Grits or Caribbean Cocktail Sauce? And don’t forget the Bimini Bread Pudding for dessert.

Be sure and check out Baumhower’s Tailgating Tips for complete information. With record cold temperatures predicted for Super Bowl Sunday in New York and New Jersey, a little hot sauce could go a long way – especially when you top your Bimini Bread Pudding with the Compleat Angler rum sauce.

7 days – and counting – to Seattle Seahawks Super Bowl Sunday! Woo hoo! As always, the Seahawks’ 12th Man stands ready to help catapult the team to victory over the Denver Broncos in the NFL Super Bowl XLVIII. 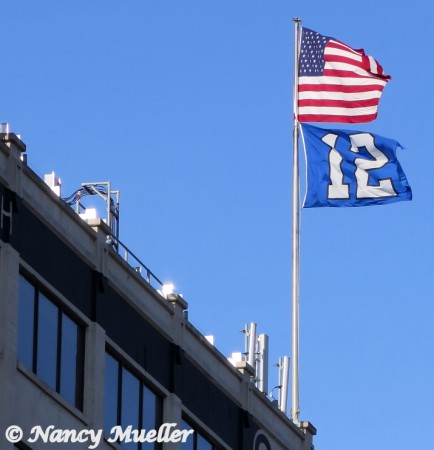 The 12th man is the collective fan base of the Seattle Seahawks. Historically, the fans showed such fierce loyalty and support for the team that former Seahawks President Mike McCormick retired the number 12 jersey in the fans’ honor in 1984. Since then, the 12th Man has grown in stature among the team players and press who acknowledge the unrivaled impact the fans have had on the team’s success.

Since 2003 the 12th Man has also had the honor of hoisting the flag before the start of the game. One of the most fervent fans, Seattle-native hip-hop artist – and now 4-time Grammy winner – Macklemore is one such celebrated past flag raiser. 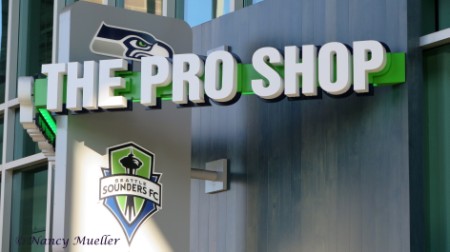 You, too, can become a member of the 12th Man club! All you need to do is be “loud and proud” in showing your support. And I do mean LOUD. On December 2, 2013 Seahawks’ fans set a Guinness Book World Record in the game between the Hawks and the New Orleans Saints at Century Link Field, registering a decibel reading of 137.6. By now you know who won that game. 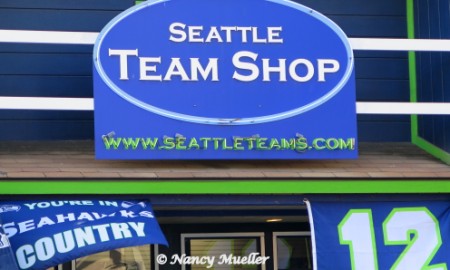 Naturally, to be a 12th Man, you need to show your true colors, dark blue and neon green. With several retailers lined up along Occidental Avenue near Century Link Field alone, you have plenty of options for selecting just the right jersey, shirt, cap or other Seahawks’ apparel and accessories.

What about you, wanderboomers? Where will you be on Super Bowl Sunday?