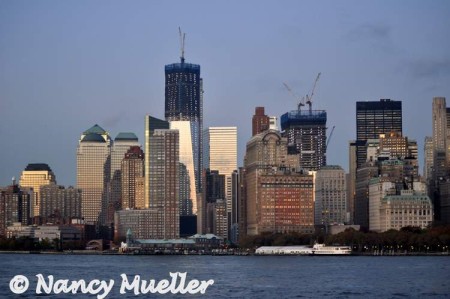 View of the New York City Skyline in Lower Manhattan

If only my travel dates to New York City had coincided with the Macy’s Thanksgiving Day Parade! Maybe next year . . .

In the meantime, I was still able to cross a few more items off my list of Must Sees and Do’s on this fast-paced trip to The Big Apple. For WanderFood Wednesday here at Wanderlust and Lipstick, I’m starting off with one of my favorite food choices: 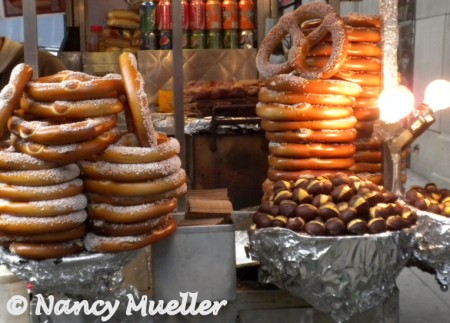 6) Snack on a super-size soft pretzel and roasted chestnuts while wandering around Midtown. All that window shopping takes its toll! Thankfully, corner street vendors abound here so you’ll have plenty of food choices to whet your appetite. If pretzels and chestnuts don’t do it for you, how about a hot dog? Or Falafal? A chicken kebab or Italian sausage perhaps?
Mmm . . .

7) After checking out the beautiful window displays at Versace, Michael Kors, Lord & Taylor, Bloomingdales, Saks Fifth Avenue (Hey – a girl can dream, can’t she?) – you know what’s next. It’s time to go shopping! My hopes are dashed, however, when my teenage daughter shows me the plan she’s already mapped out. 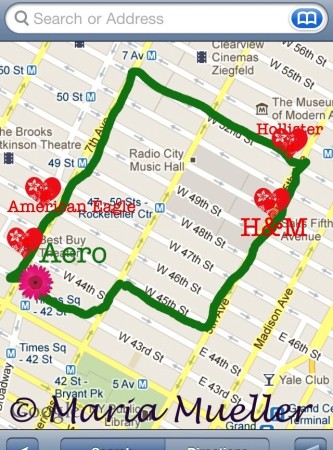 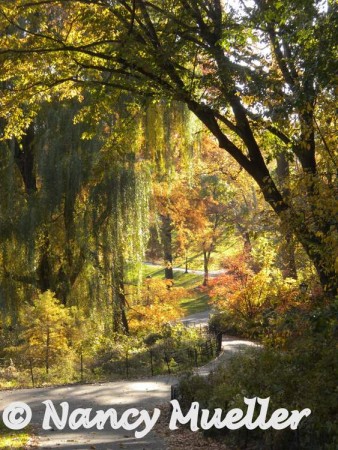 8) Take a break from urban mania with a walk in Central Park. Even a short respite will help restore your sanity and show you a portion of the lovely 843-acre landscape designed by Fredrick Law Olmsted and Calvert Vaux in 1858. I still haven’t made it to Strawberry Fields, the meditative garden created by Yoko Ono in memory of her husband, John Lennon. But I know it ranks high on the list of NYC residents and tourists alike so I’m adding it to my list.

9) Go for a spin on the ice at Rockefeller Center. If you’re not quite up for an axel jump or a camel spin, which we Wanderboomers rarely are, you can still enjoy a more relaxed skate around the rink, or simply watch the other skaters from the viewing platform. NBC Studios, Radio City Music Hall, and Top of the Rock are all here and definitely worth a visit. 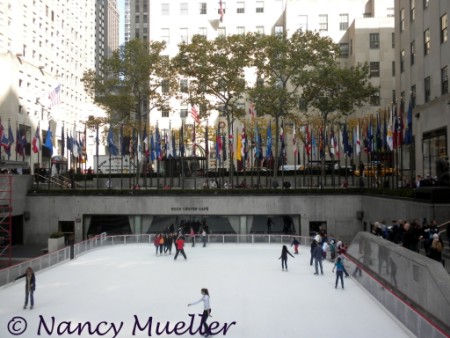 10) Keep your eye out for celebrities. You never know who you might run into so don’t be surprised if your server or tour guide looks vaguely familiar. Say, haven’t I seen this guy and gal on Law & Order? Maybe The Late Show with David Letterman?

Here’s a tip: if you do see a celebrity like Brad or Angelina (Where in the world are you, Johnny Depp?), be cooool – and always respectful. In fact, if you want to be the epitome of cool, pretend you have no idea who they are, just like I did when spotting Chris Noth and Frank Langella on previous visits. Of course, they pretended not to know who I was either . . .

Do you have any favorite celebrity sightings in NYC, Wanderboomers?
What other Must Sees & Do’s are on your list when visiting The City That Never Sleeps? If you’re fortunate to fly into New York City often, you have the luxury of knowing that whatever you miss on one trip, you can make up for on the next. But if you’re an infrequent visitor to The Big Apple like me, just remember, you can catch up on your sleep when you get home!

No matter how often I make it to the city, here’s what’s on my list of must-sees and do’s for the quintessential NYC experience: 1) For the ultimate stimulus package, surround yourself with the sights and sounds of Times Square at Night. The crowds, the noise, and traffic, the glitz and glamour, all coalesce here into one gigantic display of pulsating energy you won’t want to miss.

You don’t need to worry about looking like a tourist here. You’ll feel right at home with the thousands of others just like you who are trying to capture the moment in photos and videos.

2) Catch a Broadway show or musical in the Theatre District adjacent to Times Square. If you didn’t purchase tickets before your trip, you might be able to get tickets for shows the same day at the theatre box office. For half-price tickets, check out the TKTS booth at Broadway and 47th, but only if you don’t mind standing in long lines. On this trip, Mamma Mia was a big hit with my teenage daughter. 3) Light a candle for a loved one at St. Patrick’s Cathedral in Midtown Manhattan. Stepping inside this magnificent church is the perfect antidote to the cacophony outside its doors. Whatever your spiritual or religious leanings, the cathedral offers an oasis of silence and serenity in The City That Never Sleeps. 4) Hail a cab like a true New Yorker. While the best way to explore the city might be on foot, when you only have 48 hours, you want to maximize your time. Claudette Colbert had great success by showing  a little leg in the film, It Happened One Night, but I’m not sure this Wanderboomer would do as well. Here’s how it done: Stand on the curb. Extend your arm. You know how to whistle, don’t you? No? Then just yell, “Taxi!” If the taxi doesn’t stop, it’s for one of several reasons: the driver is off-duty (You’ll know if the lights on either side of the center light on top of the cab are on), the cab is full (the center light is on), the driver didn’t see you, didn’t want to stop, or any one of a dozen other reasons.

Naturally, it’s more challenging during rush hour (generally 5 – 8PM) or in inclement weather. The key is not to give up. Sooner or later a cab is bound to stop for you. 5) Stop in for a bite to eat while sitting under a beautiful vaulted tiled ceiling at the Oyster Bar and Restaurant in Grand Central Station. Enjoy the catch of the day, an overwhelming assortment of raw oysters, or soups and stews brimming with your favorite seafood. If you’re not a fan of fresh fish, you can always order grilled sirloin steak, a half roasted chicken, or chicken fingers for the kids. The restaurant hosts three distinct seating areas, including the popular counter where you can watch the chefs in action.

Be sure, too, to try out the Whispering Wall just outside the Oyster Bar where two people can stand in opposite corners under the arches, whisper into the corner, and hear each other loud and clear. Way cool.

What are your favorite things see &  do in NYC, Wanderboomers?

“Somewhere over the rainbow, skies are blue
and the dreams that you dare to dream really do come true.”
– Lyman Frank  Baum

Call it the luck o’ the Irish, but I’ve had the good fortune to capture a few beautiful rainbows in photos on my small-ship cruises and travel expeditions. See for yourself . . . 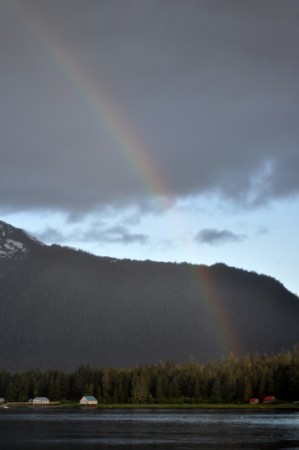 Aboard the Island Spirit, Petersburg, Alaska 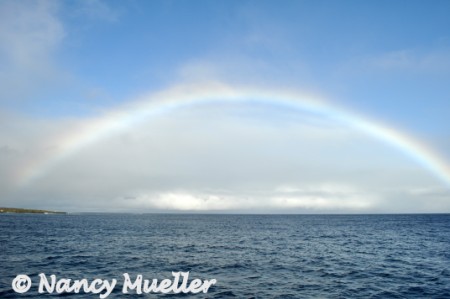 Aboard the MV Evolution from San Cristobal, The Galapagos Islands 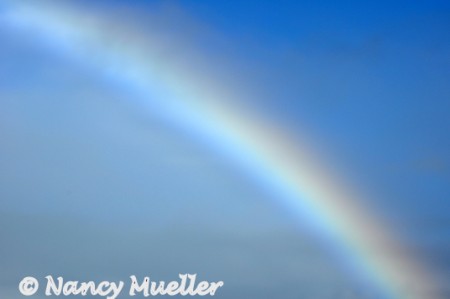 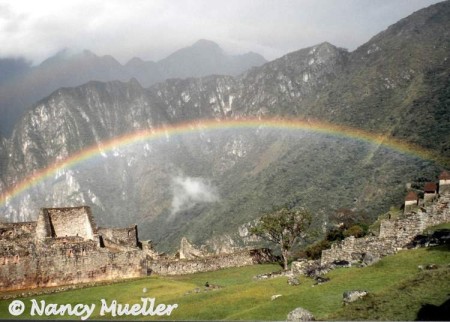 How about you, Wanderboomers? Seen any great rainbows in your travels?